My review for Evolved’s Desire was the third review I ever wrote, and it’s still up over at edenfantasys (if you’d like to check it out there, please do!). 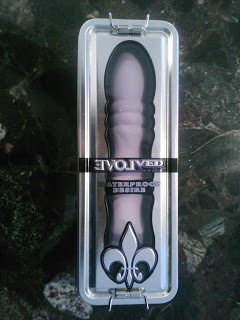 The box has little clasps on the side to close it, and it works as great toy storage. I’ve had this toy for years and I still use the box to store it in.

The Desire is made out of hard plastic and has raised ridges along the length of it for added sensation. Because the body of the toy is made out of plastic, it is compatible with water-based and silicone-based lubricants. The plastic might be hard, but it has a nice satiny feel to it that glides along skin easily, especially when paired with lube. For me this was a big difference from my matte-silicone toys, which can sometimes drag uncomfortably when inserted. Clean up is fairly easy, the Desire can simply be washed with soap and water. I recommend an anti-bacterial soap for added cleanliness.

Okay, now for some specs:
It has a total length of 7.25”, with 6 of those inches insert-able. The circumference of the toy is listed as 4”, but that will vary slightly because of the different raised ridges. The diameter is 1.25”, but again that will vary along the length of the toy. 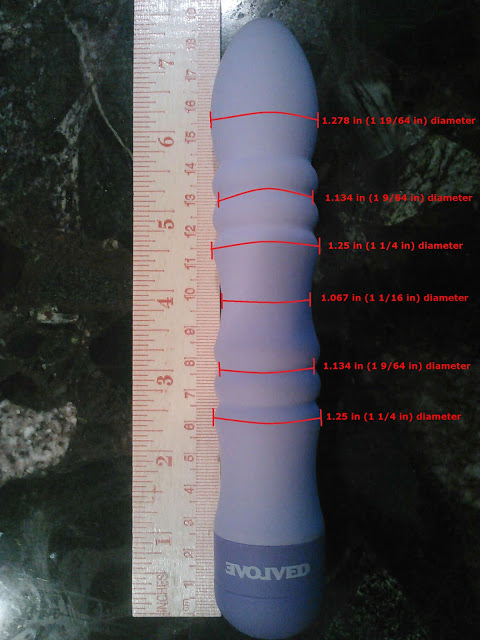 At only 0.3 lbs (not including batteries), the Desire is a fairly light-weight toy. And speaking of batteries, it takes 2 AAs.

*A note on material*

Like I said, the Evolved Desire is made out of hard plastic. And while it is food-grade material, hypo-allergenic, latex free and phthalates free, it cannot be sterilized, and therefore you should not share it without using a condom.

The Desire is waterproof, which means that it can be enjoyed in the shower or the tub (or the pool if you have one, which I do not). While using toys in the shower isn’t usually my thing, I did test this one out in the tub, because I wanted to make sure that it could hold up to its waterproof claim. As you can see from the picture, the Desire passed this test with flying colors (or bubbles). 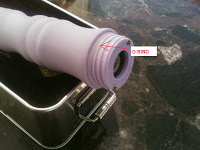 While I’ll admit that this feature can be slightly annoying, it hasn’t really been an issue for me. The button is fairly easy to reach, even when the toy is inserted and the speeds can be cycled through very quickly in case you need to turn the thing off in a hurry.

While the Desire can obviously be used internally, it’s not my preferred method of use. I’ve used it internally only a handful of times over the years that I’ve owned it, and even then, only when I’ve had a good work-up first with either fingers or another toy. For me the problem is those raised ridges that I mentioned earlier in my review. They’re great if you really love texture in a vibrator, but they just really don’t do much for me personally. I want to stress that this isn’t a “con” of the toy, and I wouldn’t list it as such, because this has nothing to do with the toy itself and everything to do with my personal preference.

This is the way that I primarily use the Desire, and it works wonderfully! The vibrations are pin-pointed in the tip and I can direct them to whichever area of my clit or vulva that I want. There are three speed settings on the Desire, and while I usually like strong and fast, the medium setting is enough to get me off (Internally, I use the fastest setting). I also enjoy cycling through the speed settings for some variation, but since you have to turn the toy off to do that, it does get a bit annoying.

Overall the Desire is a great toy for internal or external use. Personally I prefer to use it externally, but I know that there are a lot of people out there who simply love texture in a way that I don’t. If you’re one of those people, you just might find that you desire this toy!

Like I said before, this review first appeared over at edenfantasys, and I’d love it if you went to check it out there (you can even vote on it if you feel so inclined…). Stay tuned for more new reviews to be coming soon. I’m still summing up all of my experiences with LELO’s Luna Beads (so look for that sometime in the near future), and I’m still working on mastering Randy (otherwise known as The Beast).