You guys have no idea how excited I am to finally be reviewing this toy! I wanted to have this review up last week, but real life stuff (specifically planning my wedding) has gotten in the way. But never fear! Septimus is still here, with a review of the…

iGino One
A little background before we jump right into things?
About a month or so ago, I was approached by the “iGino Team” and asked if I would be interested in reviewing a new and innovative clit-vibe. They sent me their press-packet, which included this video:
I just love the way she says “massager”!
I have to admit that as a DIYer, I love the idea of creating a toy simply because you want to use it, but it’s not yet on the market. Whether the iGino is as revolutionary as it claims, remains to be seen, but I have to applaud the initiative.
The iGino is a new clit-vibe that was crowd-funded over at indiegogo.com. 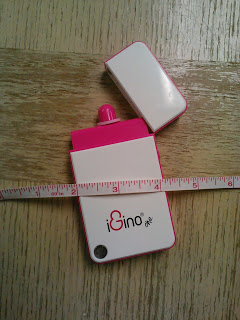 The whole shebang is the same size and basic shape as an iPhone (hence the name…) so if discretion is important to you, this toy would definitely work, at least on that front. Once you pop open the lid, however, the illusion is shattered (unless the new iPhone comes with a vibrating head? I don’t know, I have an Android).

As you can see from the picture, the iGino One has a little, uh, nubby bit on the top. This is the part that you’re supposed to press up against your parts. As you might have guessed, it vibrates. Or rather, it employs the iGino’s patented “vibraMoove” technology. When I watched the video, I was sort of under the impression that the head would move backward-and-forward and side-to-side, in a circular type movement. But this doesn’t seem to be the case. The head does move very quickly, which I count as a plus (since it means more intensity), but that does make it rather difficult to actually watch the movement. As near as I can tell, the head simply moves side-to-side, albeit rather quickly.

I like this movement. I can’t exactly tell if it’s all that different from other types of vibrations (like the company clearly claims), but when it’s pressed up against my clit, I really don’t care. It provides a very intense sensation, like a pin-pointed vibration directly to my clit. This is the only toy I have that has such a small head (for lack of a better descriptive term). My other clit-vibe has a much broader area, which allows for more stimulation of my labia and vulva, but less precise stimulation on my clit.
Which do I prefer? Honestly, it depends on what kind of mood I’m in. Generally though, broader stimulation = a more relaxed pace and more build up; and pin-point stimulation = getting off faster and dirtier!

The iGino One also comes with an… attachment? It’s this strange little flower like thing:

that you’re supposed to slip around the moving head to provide a softer feeling. I’ve tried it, and let me tell you, it did nothing but get in the way, at least in my humble opinion. After a few uses the little flower (which is just made of plain old foam) warped and deformed and doesn’t quite fit anymore. But that didn’t really bother me, I wasn’t planning on using it much anyway.

Translation = this thing is loud.

I actually tested it, and with the TV on, the iGino running under a blanket, and my door closed, I couldn’t hear it. But it took all of that to muffle the sound. So if you’re in a shared sleeping-quarters type arraignment and don’t want your roommate or partner to know what you’re up to, you might want to skip on this one (or buy them a nice pair of noise-cancelling headphones, your choice).

You’re probably wondering about the material, well wonder no more, I’m going to tell you all about it. The iGino is made out of a basic hard plastic, which means that it’s non-porus and can be easily cleaned with a little bit of anti-bacterial soap and water. I really shouldn’t have to spell this out, but DON’T BOIL THIS TOY! Not only will the plastic melt but Hello! it’s got a motor and never claims to be water-proof. Again, DO NOT BOIL! You will ruin your toy (and possibly your pride).

The packaging was pretty nice. Not LELO nice, but nice. It comes in a stiff-paper box with a nested lid. I had a hard time getting it open initially, and had to shake the thing a few times to get it loose, not sure how good that is for the toy. Once the box was opened, however, I was really impressed with the contents. The iGino charges via USB, and comes with it’s plug built right in, which means that you can go ahead and plug the toy into your computer to charge.

But what if I don’t have a computer? you ask. What if I have to share a lap-top with my little siblings and I’m reading this blog-posting at the library!!! (and I love you for that), never fear! The iGino One can also be charged in an outlet with the USB-to-wall adapter that comes with it. Since the iGino comes from overseas (Europe), the company has very thoughtfully included an additional adapter for American outlets.

The iGino One is a new clit-vibe that uses a patented technology called “vibraMoove” which kind of just feels like ordinary vibrations. The moving head is very small however, so it gives great pin-pointed stimulation that can get me off fairly quickly when pressed right up against my clit. Be warned: this little thing is loud. The toy is made out of non-porous plastic and can be cleaned (carefully) with antibacterial soap and water. It’s USB-chargeable, but comes with everything you’ll need to plug the sucker into your wall outlet (American or European).

Would I recommend the iGino One?
Now, there’s a tricky question.

Let’s look at the pros and cons, shall we?
On the one hand, it’s not a bad little clit-vibe, but at about $100 (which is what the iGino team plans on marketing the toy for), it sure is an expensive little clit-vibe. There are plenty of cheaper toys out there, but at least this one comes with the added benefit of helping out a new company that’s trying to market toys people actually want to use.
So in the end, it’s your choice. If you’re interested in trying out the iGino, you can pick one up over at http://i-gino.com/. To my knowledge, this toy is not currently being carried by major retailers, but who knows, that might be right around the corner!
Thank you so much to the iGino Team for sending me this toy in exchange for my honest review! Thanks guys, you really made my day!
P.S. Enjoy the rest of National Masturbation Month while you still can!

*UPDATE   6-2-13*
I’ve heard from the people over at iGino that their on-line store is currently undergoing some technical difficulties. I’ll let you know as soon as it’s back up and you can buy an iGino again!
In the mean time, you can check them out over at twitter, or facebook.