Skip to content
When I was contacted about reviewing a vibrating cock-ring 2 days after I’d decided to start blogging again, it seemed like some sort of cosmic sign. A big thunder-clap and lighting spelling out the message: “Yes, this is what you’re supposed to be doing”.
Okay, well maybe it wasn’t that dramatic, but when Lily Yu asked if I’d be interested in reviewing some toys for her company AphoJoy, I was really excited for the opportunity to start blogging and reviewing again! Before I go any further in this review, I just wanted to take a moment to thank Lily for giving me the kick-in-the-pants I needed to get my blog up and re-running. Thanks Lily.
The Joy-Ring by AphoJoy 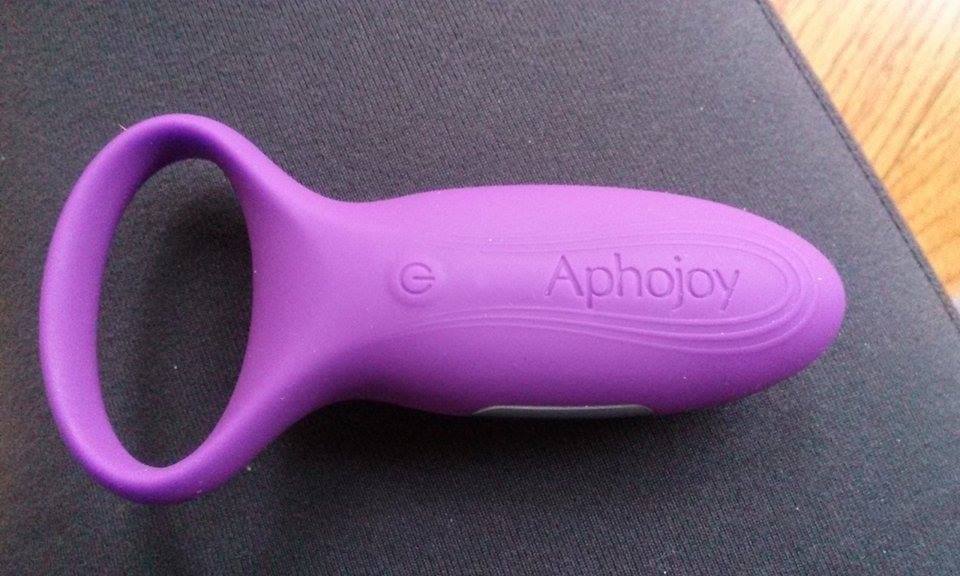 I was particularly excited to review a cock-ring because, I’d never tried one before. Well, that’s not entirely true. I did at one point own a pink jelly cock-ring that ran on a watch battery. But my boyfriend at the time (now my husband) rightly refused to let it anywhere near his dick. Considering how weird it smelled, can’t say that I blame him.
This cock-ring, however, is in an entirely different class than my first crappy BOGO grab-bag piece of junk I’d got at some seedy sex store when I was too young to know any better. This cock-ring is beautiful, soft and smooth and so much fun to touch.
First Impressions
The Joy-Ring looks a little different from most other cock-rings I’ve seen and/or come across. Instead of being just a ring with a small vibrating portion stuck onto it, it looks more like a small bullet vibe with a nice smooth stretchy ring attached. It’s made from a buttery-smooth purple silicone, and seems not to attract too much lint, so that’s a good thing. It’s about 4.5” from the end of the ring to the tip of the bullet, and the ring itself is about 1.5” in diameter (though it can easily stretch much wider).

The Joy-Ring is rechargeable, which is always a plus (have I mentioned how much I hate having to replace dead batteries in the heat of the moment? It’s not my favorite way to spend my sexy-times), though the charging port was a little hard to find the first time I tried to plug it in. Here’s a hint: it’s the little depression under the DC stamp on the “back” of the vibrating portion of the ring (it looks like it’s been covered over with silicone, but you can get the charging cable in there… it just looks a little dirty…).
In Use
Right away I noticed how the design has an impact on the function. The motor is housed in the middle of the bullet-section of the toy, which makes sense. What doesn’t make as much sense is the fact that the vibrations are mostly felt on the tip of the bullet-section, otherwise known as: not the part that’ll be touching my clit when it’s being worn on a cock (or dildo, or strap-on, etc.).
This wasn’t my favorite part of the toy, because while the vibrations are actually fairly strong, they don’t hit where I need them to hit. I could definitely feel the vibrations while my husband and I were having sex, and I enjoyed the feeling, but it wasn’t really enough to get me off by itself. That was okay though, because in conjunction with the thrusting of a cock (or dildo, strap-on, etc.) the vibrations felt reeeeaaalllly nice, and it added a fun buzzy feel to our sex.
My husband has told me repeatedly that he’s not a huge fan of vibrations on his cock, and he hasn’t particularly liked me trying any of my other vibrators out on him, but he liked this toy. It wasn’t that he enjoyed these vibrations more than other types, it was that he couldn’t really feel them all that much, and therefore, he didn’t mind them at all.
Here are some quick pros and what I’m calling pro/cons,
and then I’ll talk about a few features that stand out to me:
Pros:
Pro/Cons:
The vibrations are nice and rumbly, and if they were just a bit more centered in the middle of the toy (the part that my clit presses against while in use), I think the highest setting would be enough to get me off.
Okay, so there’s this little metal panel on the side of the toy, and I honestly have NO IDEA what it does. I’ve tried pressing it, but it doesn’t seem to do anything. I’ve held it down while the toy is on (thinking it might be touch-sensitive), but that doesn’t do anything either. If it’s decorative, it’s asymmetric, and that’s kind of an odd design choice. So yeah… no idea.
The Joy-Ring holds a charge for a long time, and that’s a good thing. I don’t generally want to have to think about if my toys are charged or not when I reach for them. I know that’s me being lazy, but the longer a toy can hold a charge, the more likely I am to reach for it and use it regularly.

I think that’s about it. Overall, I really enjoyed this toy, and I’m glad that my first experience with a cock-ring was with such a nice, high quality toy. Knowing that the toy you’re using is made of body-safe materials, and knowing that you don’t have to run out to grab a new battery, makes such a difference when you’re in the middle of sex or masturbating.
I don’t know that this’ll be a cock-ring that we reach for every single time we have sex, but I do know that this is going to be the toy we reach for when we want some buzziness mixed in with our sexiness.

If you’d like to try the Joy-Ring for yourself, pick one up on amazon!

Thank you so much to AphoJoy for sending me the Joy-Ring in exchange for my honest review!